You are probably familiar with the room diffusers — often marketed under the name "Scentsy" — people use to freshen a space, and perhaps get rid of an undesired odor.

Sarah recently made the interesting observation that Alchemy Stones work very much like energetic room diffusers; pushing away undesirable energetic influences in a room or space. 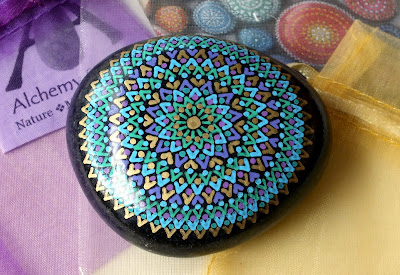 We often see this "in action" when we attend fairs and show with Alchemy Stones. We watch kids — in particular — interact with the stones, and their entire demeanor and energy changes. I believe this holds true because kids are not yet hampered by artificially introduced belief systems, telling them what they "can" or "should" believe is real. They don't have to wade through the quagmire of their "mental gumbo" in order to decide what's real, and what's not — they simply interact, from a natural place!

I am also reminded of one of the very earliest shows we to Alchemy Stones to, as a vendor. A very nice lady stopped by our booth, thought the stones were amazing and bought quite a few of them, on the spot!

We were delighted, of course, as it was one of our very first "large" sales.

Several years later. we saw her again (at a different show) and she shared that she was actually a child psychologist working mostly with troubled teens.

She kept her small basket of Alchemy Stones in her office, and whenever she had and angry and unruly youngster in the office, she'd ask them to pick a stone and go sit on the couch and just look at it. Amazingly, their mind would become calmer in a matter of a few minutes, and she would be able to "reach" them and start a real conversation!

This was a completely unsolicited testimonial, but it really gave credence to the idea of Alchemy Stones as being able to change the energetic atmosphere.

On the whole, it just makes me happy that the stones can do their part to create positive vibes!
Posted by Peter M at 3:28 PM 2 comments: