It's a question that gets asked a lot-- it seems woven into the fabric of human existence that we are always looking for "new" things. I sometimes get asked the same thing about Alchemy Stones, and the designs I am working on. 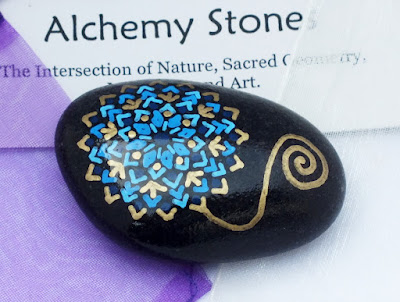 Alchemy Stone designs-- being nothing at all like laundry detergent (which always seems "new and improved!")-- are generally fairly constant... as they have been, since I drew the first ones, many years ago.

That said, small changes do happen.

Lately, spirals have been at the forefront of my mind, and they are showing up in more and more designs.

The spiral is an ancient symbol, dating back-- as far as historians know-- to at least the Neolithic period, thus predating writing by a significant margin.

Spirals seem to have many symbolic meanings; meanings that seem to depend somewhat on who you ask. Some see the spiral as representing the cycles of life and rebirth. Many variations of spirals occur in the natural world, so sometimes the spiral is symbolic of "natural" (as opposed to "constructed") things-- spirals have no sharp angles or "corners," which tend to be human constructs. Although circles are more commonly used, spirals are sometimes used to symbolize "Spirit," or "things spiritual." 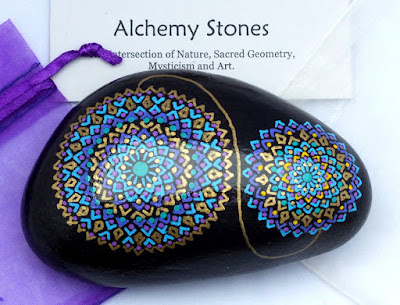 The other new-ish designs I have been working on are stones with two or more mandalas. I tend to think of these as "relationship stones," symbolizing the connections between people, things or ideas.

Sometimes the mandalas are very similar, sometimes they are quite different... in each case, they are connected by a line that represents the invisible "threads" that connect us to each other.

Finally, to answer another question I sometimes get... No, I don't "get bored" with doing the same designs, over and over.

Much like snowflakes, each Alchemy Stone is ultimately unique and no two are ever quite "the same." Because painting the stones represent a meditation for me, I am never in the same state of mind twice, and so I never end up creating the same stone twice... either visually or energetically.
Posted by Peter M at 9:14 AM