Not all I find on the beach has to do with Alchemy Stones.

When I was out for one of my walks yesterday, I found something unusual: A "Spirit Bear." 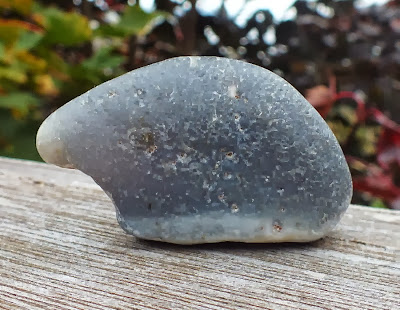 Among collectors of such objects-- most prominently found among indigenous tribes of the US Southwest-- this would be known as a "natural fetish." In this case, loosely in the shape of a stylized bear. This particular piece is actually a fairly large gray banded agate that happens to have broken and been polished by rocks, surf and tides to this particular shape.

According to the mythology of the Zuni Tribe (located in New Mexico and Arizona, primarily), Bear has the power to heal and to transform human passions into true wisdom. Bear represents the power of healing through introspection and "going within" for answers... and reminds us that, to some, the period of hibernation may appear like a form of depression when-- in fact-- it is a period of healing and gaining strength for new challenges ahead.

Traditionally, Bear is also considered to be the Guardian of the West. Interestingly enough, I found this Spirit Bear as I was walking home towards the west, towards the setting sun. At first, I thought it was just a gray rock, but when I held it up to the sun... it became obvious that it was actually a piece of banded agate. 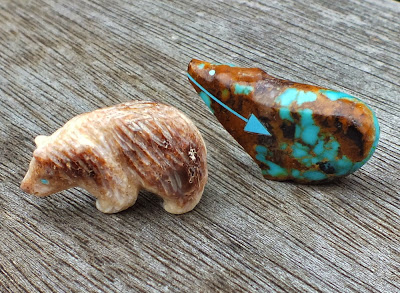 "Natural" fetishes (or "spirit animals") are quite rare and highly prized. Many people are probably familiar with the Zuni carved versions you often see in galleries throughout the Southwest.

Pictured here are a pair of modern Zuni fetishes featuring bears. On the left, a more "realistic" style; on the right, a more stylized version... closer to the traditional native carvings. As you can see, the shape of the "natural" bear does bear quite a resemblance (no pun intended) to the deliberately carved shapes.
Posted by Peter M at 9:31 AM